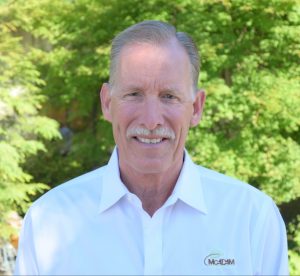 Serving as President and co-owner of McAdam Landscaping, Inc. since 1979, Scott’s focus is primarily on construction, landscape installations and design. He is responsible for the design of more than 1,300 commercial and residential designs. Scott is a registered landscape architect in the state of Illinois.

Scott is deeply involved in the landscape and nursery industries. He served as President of the Illinois Landscape Contractors Association (ILCA) in 1992/1993 and an unprecedented second term in 1998/1999. In February 2001, he received the ILCA’s Man of the Year Award. He is a supporting member of the Greencorps Chicago program, which promotes environmental stewardship and quality of life in Chicago.

For six years, Scott served as a member of the University of Illinois (Champaign) Horticultural Advisory Board. He also served on the boards of the Illinois Turfgrass Association and the Mid-Am Horticultural Trade Show. Scott has also testified, as an expert witness, regarding landscape ordinances for the City of Chicago. He was an eight-year board member of the Chicago and Flower and Garden Show.

Additionally, he is on the public policy committee of the Illinois Green Industry Association, which honored him in 2015 for contributions furthering the green industry. He served on the Information Technology Committee of the American Nursery and Landscape Association for seven years and also served as the association’s senator from Illinois.  In 2004, Scott helped form the Fund for Excellence for the University of Illinois, College of ACES with the department heads and one other industry partner. To date this fund has generated more than $50,000 in cash and pledges to further the education of students at the University of Illinois. In addition, in 2016 he received the Award of Merit from the College of ACES.

Most recently, Scott’s commitment to Rotary has expanded. A member of the Rotary Club of Oak Park-River Forest since 1995, he served a term as the club’s president and in July 2017 began a one-year term as the Rotary’s District Governor for District 6450, which encompasses nearly 65 clubs in Chicago and throughout the suburbs.

His honors include receiving the Oak Park and River Forest High School’s Tradition of Excellence Award in 2006. Scott’s media appearances have included being a landscape/horticulture specialist for Chicago’s WGN Radio programs, and appearing on WGN TV.

Outside of the industry, Scott served on the board of the Des Plaines Valley Council Boy Scouts of America for 18 years and the Foundation Board of West Suburban Hospital. He resides in Lemont with his wife.